The President is the head of the state elected by the citizens. He manages a country's foreign policy and military.

The President can propose 5 laws in 1 day. 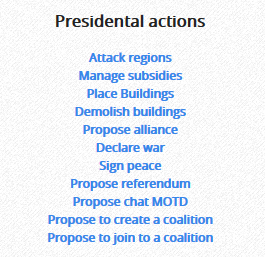 Retrieved from "https://esim.fandom.com/wiki/President?oldid=12243"
Community content is available under CC-BY-SA unless otherwise noted.